In keeping with my "cutting back" strategy this year, I only planted up three of the six annual veg beds on the hilltop.

One bed contained the garlic, which was harvested a couple of weeks ago (I wrote about it in THIS post) and is currently drying in the garage.

This was not so much brought about by my desire to try something new, but rather the fact that the netting for this bed had torn.  Both the broccoli and onions have special netting as they are too tall for the standard size.  In both cases, I have to sew two lengths of netting together to get the required height.

This spring, I realized that one of the nets was torn and would require serious patching (i.e. sewing).  The onions took priority so they received the intact netting.  The brassica bed (which this season holds broccoli and some newly sown kohlrabi & cabbage) was covered with the smaller netting until the broccoli grew too large, at which point I removed the netting.  I then waited until I saw cabbage worm activity to apply BT, an organic solution which only affects caterpillars.

Email ThisBlogThis!Share to TwitterShare to FacebookShare to Pinterest
Labels: Broccoli

This morning, I harvested the garlic - it's always one of the hilights of the season as you just never know what you will get.  As with most root crops such as potatoes & carrots, the "surprise" factor is always fun.
This year, I let the garlic mature a bit longer than I normally would - I had been meaning to harvest it for the past week, but just never got around to it.
I try to harvest the garlic when the bottom 2-3 leaves die down, but this time, the bottom 4-5 leaves were dried up and/or yellow on all the varieties, with yellowing reaching most of the top leaves.
Read more »
Posted by Margaret at 4:05 PM 6 comments:

Email ThisBlogThis!Share to TwitterShare to FacebookShare to Pinterest
Labels: Garlic

A New Type of Chard


This year, I only grew one type of chard - perpetual chard.  I've also seen it go by perpetual spinach, perpetual spinach chard, beet leaf spinach or sea kale.  Perpetual chard is part of the beet family, just like Swiss Chard, but falls in a different group (Beta vulgaris Cicla Group vs. Swiss chard, with it's thick stalks, which falls in the Flavescens group).  Learn something new everyday, don't we?
Read more »
Posted by Margaret at 4:10 PM 5 comments:


The first tomato has been harvested and, as usual, it is something to celebrate!


Bloody Butcher is very quick to the finish line.  In fact, it will often ripen before the cherry tomatoes (as is the case this year).


While I'll pop the first cherries right into my mouth when they ripen, the first larger tomatoes are usually destined for a BLT - tomato season is the only time of year we eat them since the tomato flavour is such a big part of that sandwich.

But this year, BLTs will have to wait.  I am fresh out of Bloody Butcher seeds, so I have these marked to save.  And just so that I don't forget, I try to place a marker in front of each variety to be saved as a reminder.


The onions have started to bulb up, which is always exciting!


This year I only planted 2 varieties, which happened to be the only long day varieties that I could get my hands on at Baker Creek Seeds - Wethersfield and Stuttgarter.  While I grew Wethersfield last year, Stuttgarter is a new-to-me variety.

Let me jump right in - I've been silent here for a while for three reasons.  Firstly, there's the usual mid-summer reason - busy, busy, busy in the garden.  Secondly, there's the fact that "stay at home" means that I've had exactly 2 days in the past 4 months of alone time - Mother's Day and my birthday.  Yup - that's it.  And thirdly, our lives, just like everyone else's, have changed over this time and the blog fell by the wayside.

The stress of the pandemic, of course, is ongoing, as are the practical aspects of having people home all the time - I both dread (is it contaminated?) and celebrate (no cooking & dishes!) the occasional times we get take-out. 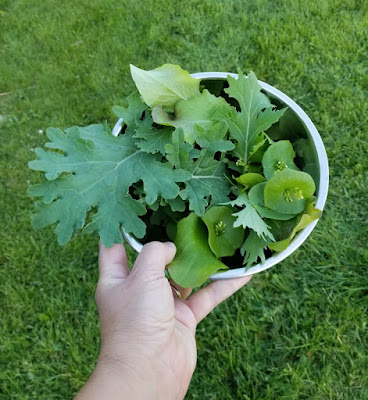