It's Harvest Monday and there's not much to report this week....two harvests and one addition to the tally that I had completely forgotten about.

Half of the leeks remaining in the bed were harvested, photographed here after being trimmed and rinsed:

The Lancelots are a bit bigger than the Jolants, but none would be classified as large.  A good chunk of these leeks are destined for soup - cream of leek soup, to be exact.  I loved this soup as a kid so I can't believe that I've never actually made it from scratch.  I hope it turns out as good as I remember!

The only other harvest was a basket of broccoli: 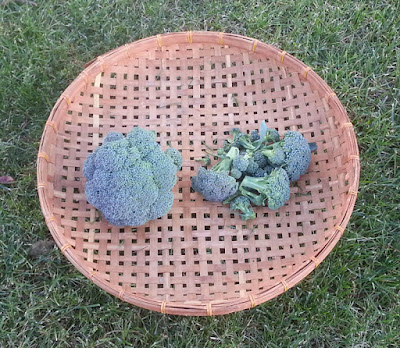 I picked the big head that I mentioned in my Update post a few days ago.  It weighed in at just over half a pound (250 grams on the nose).  There are a few small spears left on the plant so I think I'll get one more picking before the harvest is done.

Now on to the forgotten tally addition - the beans that I pulled back in October & have been drying in my basement ever since.  I finally got around to shelling them this past week.

I took a chance and sowed two new varieties of dried bean in late July - Arikara and Calypso.  I was cutting it really close when it came to days to harvest so whether or not this sowing would amount to anything was anyone's guess.

Well, I did manage a harvest, albeit not a huge one - 560 grams (1.23 lbs) of dried beans all told.  This spot had previously contained shelling peas, so all in all, I'm rather happy with how much I was able to get out of the space.


Aren't the Calypso gorgeous?  I've not cooked with either of them yet but will let you know what I think of them in the kitchen when I eventually do.

“Enjoy the little things, for one day you may look back and realize they were the big things” ~~ Robert Brault
Posted by Margaret at 11:41 AM