The Garden of Dianne & Dan Latham (aka 'Latham Park')


In the past few years I've been on numerous garden tours, thanks in large part to the annual Garden Bloggers Fling and the GWA conference.  There are many gardens that I have yet to write about - in fact, I still have to go through the photos from this years travels.

Today, I'm going back...way back...to 2016 and the Garden Bloggers Fling in Minneapolis.  My favourite type of garden is a "gardeners garden" - you know, where the homeowners love really shines through - and the garden of Dianne and Dan Latham was just that.

Dianne & Dan's garden, described as a mini-botanical garden, is often referred to as Latham Park. 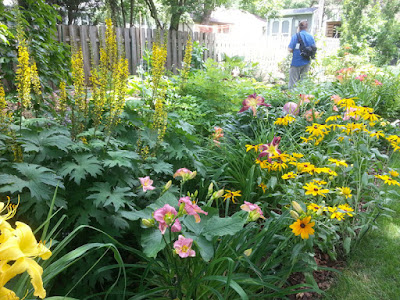 
The fall weather this year has not be cooperating - I can't recall an end to the season quite as cold as this one with zero warm ups.  In fact, this morning, we woke up to a bunch of white stuff on the ground - this is the earliest snowfall we've had in a very long time.

It's late in the season - some may say the season is already over - but several tasks were still on the to do list.  The most pressing of these was getting the garlic in the ground.  I was waiting and waiting and waiting for that elusive "nice" day to get this task done - but I finally realized that it was not going to arrive.

On Sunday, it was just above freezing BUT it wasn't windy and the sun was out.  From the looks of the long-range forecast, this was as good as it was going to get so I decided to get out there and plant the garlic.  I had to do it in stages...prep the bed, come inside for a warming break, plant a couple of rows, come back in - you get the picture.

The fact that I waited much too long to plant the garlic hit home when the manure I planned on incorporating into the beds was half frozen.  I did my best to break it up and even brought a bucket of clumps inside to warm up for a few hours.  When various members of the family asked what's in the bucket, I nonchalantly replied "sheep poo" as if that's the most normal thing to be carrying around in a bucket, inside the house, in November.  You know you've trained your family well when the only response that generates is an understanding nod 😁

Email ThisBlogThis!Share to TwitterShare to FacebookShare to Pinterest
Labels: Garlic


It’s been a chilly few weeks here – temperatures have been topping out at 6 or 7C (43F) each day which doesn’t really motivate me to get moving on finishing up the remaining tasks in the garden.   There’s still a small laundry list of things to do before the garden is closed for the winter – cutting back the asparagus ferns, digging up dahlia tubers, harvesting the remaining carrots, chard & broccoli and, most importantly, planting out the garlic.

For those that follow along on Instagram, you know we were getting our front walkway redone.  It was a narrow, weedy mess and on the “to do” list for a few years now:

The walkway was widened and we cut back a lot of encroaching growth….what a difference it’s made!  One of those things that you kick yourself for not getting to sooner.

There are a few invasives in the bed on the right hand side, between the house and the walkway, that I’ve been trying to get rid of (periwinkle and self-seeded spirea).  I’ll be laying down black plastic topped with mulch & leaving that in place over the next year - hopefully this eradicates them & I'll be able to remove the plastic and plant some better behaved shade tolerant perennials by the following year.