This is the tale of my front porch.  I've been meaning to write something up about my journey for a while now so, heads up, it's a bit lengthy...you may as well grab a cup o' something 😉

I am absolutely thrilled with my front entrance pots this year.  I have made a go of this area - albeit as more of an afterthought than a concerted effort - for a few years.  This time, however, I wanted to do a better job - plus I was able to get out to the garden centre a bit earlier than usual and actually snag some lovely plants, which definitely ignited my enthusiasm.

Back in 2017, after years of decorating the porch solely with a wreath and perhaps some evergreens at Christmas, I decided to add a bit of colour to our front entrance.  I purchased a large pot, plonked it beside the front door and did a bit of experimenting.

The first year, I planted it up with a couple of coleus and begonias as well as the obligatory dracaena spike in the middle.  Having gone from a bare corner to a bit of green, I was really quite happy with it, even though it was rather "meh" being neither original nor exciting.

I obviously didn't know how to take care of container plants that well either.  This photo is from mid-August - I failed to pinch back one of the coleus, which is blooming, and the overall growth on the plants in general is underwhelming.

In 2018, I decided to forgo the dracaena spike and tried a different combination using sweet potato vine, coleus and euphorbia.  All of the tags indicated that these would do well in both sun AND shade.  The photo below was taken right after planting.  I didn't get a photo during the season but suffice it to say that the coleus did ok but both the euphorbia & sweet potato vine didn't do much of anything.

Once again, this was a lackluster display, although I'm not sure if the lack of light or my so-so tending was to blame.  Maybe it was both.  Needless to say I'm definitely skeptical about the "sun OR shade" claim on both the euphorbia and sweet potato labels!

In 2019 I went a completely different route.  I was planting up the west border with perennials and decided to use a few of them in the front porch area as well, instead of going with annuals.  Since this is a full shade area, I went with a couple of varieties of hostas and heucheras.  The plan was to use them on the porch over the summer, then plant them up in the garden once fall arrived.

I'm kicking myself for not getting photos when I first planted them or what they looked like in the end.  And not for the usual "they were amazing!" reason.  In fact, it was the exact opposite - my plan was a huge failure.

The idea itself was a good one (I'm still planning on doing it again at some point) and the plants were great - the problem, it turned out, was the soil.  I purchased a new soil mix that year and used it in all of my pots...and it was a disaster.  Absolutely nothing thrived and I even ended up losing a few plants.

At some point, I began to suspect that there was an issue but didn't realize that the culprit was the soil until mid-summer.  I removed the pitiful looking hostas and heucheras & planted them in the ground in the hopes that they would recover.  I then replaced the soil and replanted the pots with a variety of coleus.

The groupings of all-coleus were inspired by a garden I had seen at the Garden Bloggers Fling with a TON of different coleus (turning me from a "they are ok" to an "I love them all!" fan 😁).  In addition to the one large pot, I added a few small pots on the other side of the door with a different coleus variety in each one.  Once again, I was happy with the results compared to what I had done before (in fact, I was very happy with this attempt), but it still didn't tip my happy meter into the super-excited zone.

As a sad side-note, both the hostas & heucheras that I transplanted into the ground were too far gone and none of them made it to the following year.

Then there was 2020 which was, well....2020.  At one point, I do recall going to the garden centre looking for annuals but it was pretty late by then - I'm thinking June.  The shelves were empty and, quite frankly, I just wasn't motivated so I didn't bother with pots by the entrance at all.

This year, I started with a clean slate...and renewed enthusiasm.

Our front porch faces north and the steps get about an hour of evening sun while the covered porch gets virtually no direct sunlight.  Having a shady area poses the obvious challenge in that your plant choices are limited, but it also has one big benefit - pots dry out at a much slower pace than they would in full sun.  A couple of years ago, a friend of ours was moving and I gladly took a box of small, well-aged terra cotta pots off her hands with visions of grouping them somewhere in the garden.  The shady entrance was the perfect spot to try this.

Instead of limiting the display to the porch, I decided to also place either a single large pot or a grouping of 3 small pots on each side of the stairs.  Lastly, I purchased a new square planter for the porch and moved the round one to the ground beside the stairs.

While I had already done a mini-grouping of 3 pots of coleus in 2019, pictured above, I planted them up part way through the summer.  Keeping small, terra cotta pots going all season, especially during our hot summers when temps are consistently in the high 20C's (80F's), was something I hadn't done before.

So here we go with the show.  I've provided a couple of photos for each pot/grouping - the first is when they were first planted in late May.  The 2nd photo shows them in mid-July.

Left side of stairs: 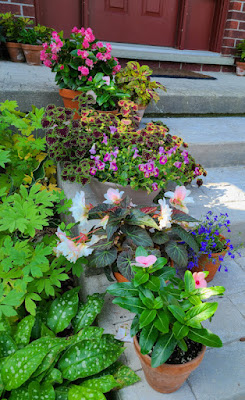 Right side of stairs: 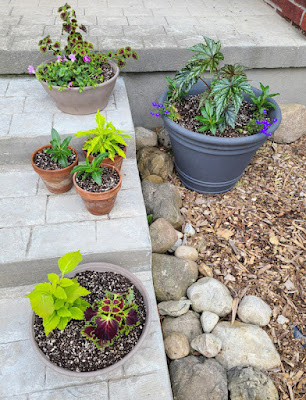 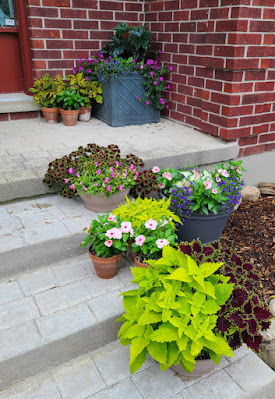 Left side of door: 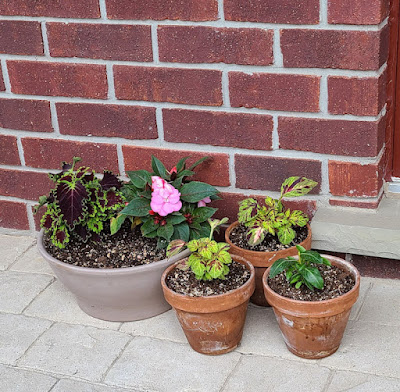 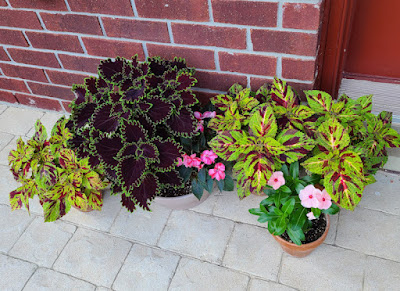 Right side of door & square planter: 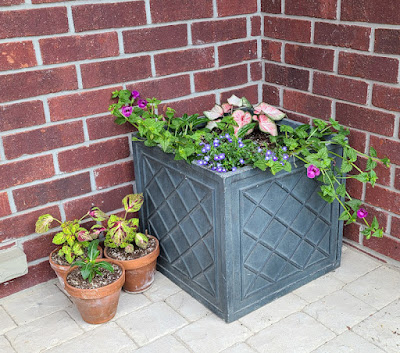 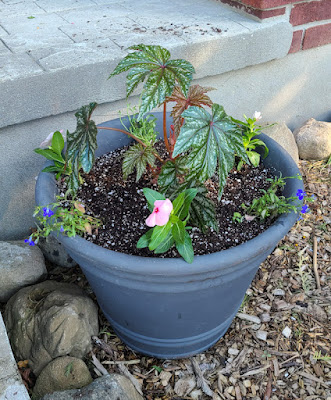 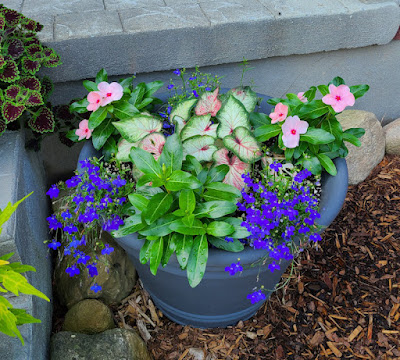 You'll notice that I originally had the rex begonia in the round planter and the caladium in the square one, but after about a month I ended up swapping them as the caladium was shorter than I had anticipated and, conversely, the rex begonia was taller.  I much prefer them in their new homes.

As for my care regime, it's much improved.  Not only did I do the almost painful pinching back of coleus and impatiens when they were first planted (pinching off the impatiens flowers was so hard!),  but I'm also using a water soluble fertilizer every two weeks or so and keeping on top of the watering like a champ.  Speaking of watering, it's been a hot summer once again, but I've only had to water these guys once per day at most.  In fact, I often skip a day as a "finger" test indicates that the soil is still moist.

One other plus that I didn't even really think about until we had a few bad storms is that our front entrance is fairly well protected from the elements, particularly when it comes to wind.  The porch is recessed and a huge spruce on the west side of the house plus a dwarf spruce on the east provides the perfect windbreak for the entire front entrance area, including the steps.  Definitely something to consider when growing in pots, especially those that are smaller and/or on the narrow side.

I'm happy to say that my excitement meter is definitely in the red zone when it comes to our entrance pots this year & I've taken lots of notes, both on things I want to repeat and things I will change up (the PW Colorblaze Wicked Witch coleus has almost gobbled up the New Guinea impatiens!).

But the best part is the fun I've had both creating & watching this area "bloom", so to speak.  Every day I look forward to going out there, watering can in hand, and seeing how things are doing.  This is definitely the most  I've ever enjoyed our front porch in the 11 years we've been here & I can't wait to continue experimenting in the future😊.

“Enjoy the little things, for one day you may look back and realize they were the big things” ~~ Robert Brault
Posted by Margaret at 7:28 AM