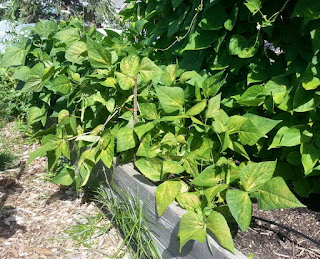 You can see the roll of chicken wire fencing in the back.  Nope, haven't put it back up yet.  Yes, I'm tempting fate.  But we haven't finished mulching the expanded area, so it will likely stay this way until either the mulch is done or I start to see bunny damage, whichever comes first.
Labels: Beans Broccoli Calendula Chinese Cabbage Chinese Greens Cucumbers Eggplant Favas Herbs Kale Peas Peppers Swiss Chard Tomatoes Zinnia