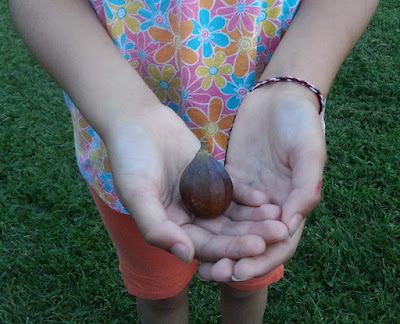 The fig trees were purchased at a sale in 2015 and stored in the basement cold cellar over the winter.  Given the ups and downs these plants went through in their first year (have I mentioned how bad I am at remembering to water potted plants?), I was just happy that they were still alive in Year 2 – the fig was a bonus 😊.  Over the summer I placed the containers on the hilltop with a couple of drip irrigation lines running to the pots and they flourished although, sadly, we didn't harvest any more figs.

The strawberries also did well – we harvested 3.5 kg/7.8 lbs of fruit which is not bad considering the 8'x4' bed was in its 4th year. 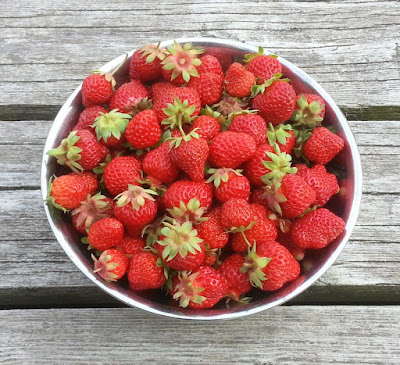 The bed was on the decline, however, as the harvest was down by about 25% from the prior year.  In the fall, I ripped out the plants and am starting fresh this year.  Ideally, I should have started a new bed last year so that I could harvest this season, but I had neither the time nor the bed space (I didn't want to grow them in the same bed and all the others were occupied).

When it came to the cherry and plum tree it was a disappointing year with zero cherries harvested and barely half a pound of plums.

The cherry did set a good amount of fruit, but netting it was difficult due to it's height/width.  The birds picked at the protruding cherries and then entered the netting from underneath - pits were all that remained.

I pruned the cherry tree last year, reducing it's height and heading back a few of the longer side branches.  I'm hoping that this will make it easier to net this time round.

In terms of the plums, I’m not sure why they didn’t bear well – it may have been frost damage or perhaps they bore too heavily in the prior year since I didn’t thin out the fruits (which can lead to bi-annual bearing).

When it came to pruning the plum,  I shortened a few very long branches that were practically on the ground when the tree was laden with fruit in 2015.  In addition, one of the varieties grafted onto the tree is more vigorous than the others - Shiro.  I thinned this variety quite a bit as I don’t want it to take over the tree or draw too much energy away from the others.  The plum also has an issue with black knot which I'm trying to keep on top of by pruning out infected branches

The plum tree is a five-in-one but one of the varieties is a mystery as I lost the tag years ago.  Only two of the five varieties have ever produced a good harvest – Shiro and Burbank.  I’ve picked a few French Prune plums as well but the other 2 varieties – Santa Rosa and the mystery variety (MV) have not produced any harvests over the 6 years I’ve had the tree.

I’ve noticed that the Shiro and Burbank bloom at the same time, with the French Prune and MV blooming 2 weeks later.  Just a note that since I've never had any fruit from the centre of the tree, I'm guessing that this section is the MV.  There is a chance, however, that this entire section is French Prune and the MV has been lost due to lack of vigour or pruning.  If this were the case, it would explain the poor results for the French Prune as it wouldn't have a pollination partner.

The final variety is Santa Rose, which is a tiny twig – literally – at the bottom of the tree.  It has barely grown since I planted the tree.

I’ll be trimming this variety off when I do my next pruning as it will obviously never amount to anything.

Lastly, we have the berry canes which had their own share of good and bad.  The good:  We harvested the first bowl of raspberries - hurray! 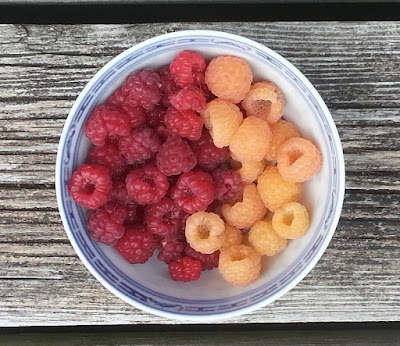 The bad?  With everything else going on in the garden last year, other than an initial layer of mulch and occasional watering, I neglected the berry runs all season.  They are pretty much overgrown now (that pic will be in my 2017 post), but this is what the runs looked like in early summer last year:

Even with the invasion of grass and weeds, the raspberries still did ok, but the blackberries suffered.  Not only did I not harvest any blackberries but I also ended up losing quite a few canes.