To be honest, this need to start using "saved" items actually surfaced long before our current situation.  It arose almost two years ago when both of my in-laws passed away within months of each other and we had to go through their belongings, deciding what stayed and what had to go.  Seeing so many items that they had accumulated over the years but barely used (or were simply "saving") was sobering.  It was at that point in time that I decided to go through my own things.  I wanted to start using what I had as well as do some selective editing...and many charity carloads and Kijiji ads ensued.  I'm nowhere near done, with several basement shelves of boxes still to go through, but at least the process has begun.

Last year, I wrote about how this shift in attitude also translated to the seed stash in my Seed Diet post.  Each year, I purchased more and more seeds, even though I had bins of leftovers (or, in some cases, unopened packets) from previous years.  While I thoroughly enjoy trying out new varieties, seeds do have a finite shelf-life and it just felt wasteful to continue purchasing when I had SO many varieties to choose from already (at last count, my seed stash approached 300 packets 😳).

So I made a decision.  Each year I could, if I chose, pick one or two veg to "trial" different varieties, but otherwise I would cut my purchasing down to the bare minimum and concentrate instead on using what I already had.

This year, I purchased a few packets of seeds right before the entire seed industry went a bit bonkers with the unexpected demand generated by everyone wanting to grow their own.  My purchase was primarily the result of having run out of onion seeds as well as needing some fresh lettuce seeds.  I also added a few packets of ornamentals in there for good measure - mainly zinnias, 'cause they are one of my favourites, of course!


But back to using what I already had.  The mixed wildflower/annual packets in the 1st photo were collected over the past few years and I had been setting them aside for....I'm not sure what.  The perfect spot?  The perfect year when I had plenty of time to start a wildflower garden?  Who knows?

I took out my entire seed stash this past spring and re-organized the lot.  In doing so, I set these packets aside to - finally - use them up.  I also set aside a couple of other seedy items that had been sitting in my seed bins.  A card from Botanical Paperworks that has wildflower seeds embedded into it and a bag containing 3 seed "bombs" which are supposed to provide an "explosion" of herbs when planting (I'm rather skeptical of that one). 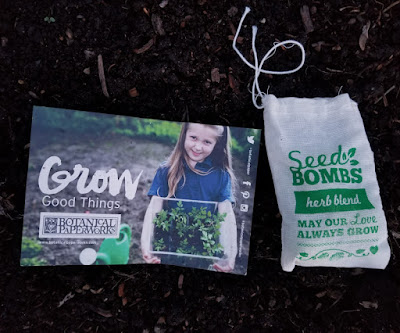 I decided to set aside one of my beds and give all of these seeds a try.

Then I raked it smooth:


The 8'x4' bed was divided down the middle, lengthwise, then into thirds on each side to give me 6 quadrants.


One packet of seed was sprinkled into each quadrant - this may or may not have been too much seed for that sized spot.  Guess we'll find out soon enough!


All of the seeds need a "barely there" covering of soil, so I simply racked them in very lightly.

The seed bombs and card were planted in a separate bed (where I'm growing dahlias that I was able to successfully overwinter - a big win!)


Now it's a waiting game to see what (if anything - some of these guys are OLD) comes up.