With the work being done in the garden this year, I am once again cutting back on what I'm growing to the essentials.  Well, the essentials according to me 😉.

"Regular" & lemon basil are always on the grow list.  I started growing lemon basil several years ago and I wouldn't be without it.  It's absolutely delicious mixed with Greek yoghurt - one of our favourite veggie dips.

When it comes to regular basil, I enjoy trying new varieties.  About 7 years ago, I had a very bad basil year when the entire crop was infected with basil downy mildew (BDM).  The following year, I grew Eleanora, a BDM resistant variety, and it was a success - the basil patch was mildew-free.

I only had a few seeds left of Eleanora last year (I can't believe they lasted that long - a full 5 years!!) and wasn't able to get any more due to the Covid seed shortages, so I made due with the varieties I was able to get, including a new-to-me "Dolly" basil, purchased from Richters.

The catalogue description for Dolly states that it has very large yields - up to 50% more than Genovese.  Well, I have to agree - last year, it was a standout in the basil patch.  Not only was it larger than either of the other two varieties I grew (Eleanora and Genovese), but it also took quite a bit longer to bolt.

What's interesting is that I haven't had any issues with BDM in the past few years, even with non-resistant varieties.  This being the case, my attitude is much more laid back and I decided that I would do without Eleanora this year as I already had enough basil seed in the coffers. 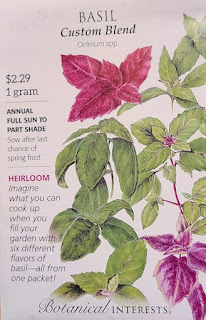 This one should be lots of fun as it has a variety of basils, many of which I've not tried before such as anise, cinnamon, and red rubin.  It's like the proverbial "box of chocolates" - you never know what you're going to get.  And while I often avoid blends for that very reason, it's no longer an issue when I'm also growing plenty of my chosen varieties.