My 2nd post on the brassicas of 2015 is all about the successes – namely broccoli, salad turnips, kohlrabi and radishes.

My first attempt at growing broccoli was in 2014.  It was a late sowing (transplanted at the end of July/early August) in the hopes of getting a fall crop & I did harvest a few small heads.  The sowing was much too late to generate any side shoots, although Munchkin showed some promise on that front.

My intention in 2015 was to do a proper spring planting and trial 4 varieties of broccoli – Packman, Munchkin, Aspabroc and Arcadia.  Unfortunately I had issues with both Packman and Munchkin right from the start.  If you want the details, you can take a peak at the broccoli post I wrote back in May.

I’m sure that the rush that ensued once we got back from vacation had a lot to do with my problems as I had many issues during that time period.  Bottom line is that I only ended up growing two varieties of broccoli in 2015 – Arcadia & Aspabroc.

This was my first time growing Aspabroc and it was a bit underwhelming.  I messed up when harvesting it and cut the shoots too far down on the stalk, thinking those stalks would resemble asparagus in taste.  Only later did I realize that cutting them so low would limit their ability to generate side shoots.

Whether I would have been happy with its performance had I cut the shoots properly is anyone’s guess.  I don't recall that these tasted any different from regular broccoli & am fairly certain that they did not taste like asparagus.

Arcadia grew right alongside the Aspabroc...and it was beyond amazing.

My notes suffered this past year – a lot.  Apparently I had 4 Arcadia seedlings to transplant (2 of which would have been thinned had the other varieties survived) ….but I ended up with 7 plants in that bed.  Where those extra 3 came from I have no idea.  I must have had more seedlings than I noted and used those to fill the gaps.

All of the central heads were harvested by August 9th, but Arcadia kept sending out side shoots for FOUR more months, some of which rivaled those main heads!  The numbers speak for themselves:

Happy, happy, happy…..broccoli topped the list when it came to highlights this year.  I froze quite a lot and it looks like we will be enjoying it until spring arrives.  If I had grown another couple of plants, I could have added this to the list of veg that would last until the next harvest & I no longer need to shop for…this will be a goal for next year!

Last spring, I sowed the broccoli about 3 weeks later than I should have so this year I *plan* to stick to my schedule.  :) I will be growing Arcadia again – was there any doubt?  I won’t be giving the Aspabroc any bed space, but will be keeping the seed in case I want to give this variety another go in the future.

I’ll be giving Packman & Munchkin another try.  I also have seeds for a variety called “Calabrese” which is supposedly good for a fall crop.  I’m still undecided as to whether or not I’ll be including this one in the plan.

Lastly, I’ll be changing up the spacing in the bed.  You may wonder – why bother tinkering with spacing when this year was such a success?  Well, I’m an experimenter & am always willing to try a new method in the hopes of a better harvest.  The thing with experiments is that there's always the chance they will be a flop – you just have to be willing to take the risk.  This year, I planted the broccoli 12” apart in 2 rows that were spaced 24” apart.  Next year I plan to try a suggestion I received from Daphne & plant them with 16” spacing all the way around.  The only issue with this new spacing may be the salad turnips - I inter-planted them between the broccoli rows in the spring, which worked out REALLY well.  Hopefully the revised spacing still allows for that.

Salad turnips were new this year and what a revelation!  They were so incredibly yummy...we couldn’t get enough!

White Lady was the definite favourite – it had EVERYTHING going for it.  The turnips were very sweet, mild, moist, and crisp, even when I left them a bit too long and they got rather large.  It was a super quick grower – for once, the “30 days to harvest” printed on the packet was accurate :)    And then there was the bonus crop – turnip greens - which were also mild and delicious.

Just Right was ok, but they took over twice as long to mature (60 days) and their flavor was somewhat stronger.

Salad turnips are here to stay.  Next season, I’ll be sowing them a bit earlier and I'll also try to do some sort of succession instead of sowing them all at once.  I must say they did keep very well in the fridge, so we’ll see if the bother of succession sowing every couple of weeks is worth it.  Perhaps I’ll do monthly sowings instead.

As for varieties, White Lady is so good in every respect that I’ve decided to leave it at that for next year.  I only grew it in the spring and fall last year, so it will be interesting to see how it does if I do end up sowing them during the summer as well.

The kohlrabi was a case where it wasn’t the quantity that made it a success this year but the variety.  My first try at both growing and eating kohlrabi was in 2014 when I grew Early White Vienna.  I found it to be rather strongly flavoured – very cabbagey – although roasted it was pretty good.

Having never eaten kohlrabi before, I had simply assumed that this is what it tasted like and had relegated it to secondary crop status – nice to have a bit coming out of the garden for variety, but I wasn’t about to devote more than a square or two of space to it.

This year, I grew a few Early White Vienna's but also tried a different variety – Kolibri – and my views have taken a 180.

We LOVED the Kolibri; in fact, the few sticks that the above bulb provided were fought over when they ended up on the veggie tray.

It’s too bad that the bulbs didn’t end up being that big, which I’m thinking was due to both inadequate irrigation and how late the seeds were sown.  Also, the bulbs harvested in December were not as tender as the one harvested in November, so we ended up roasting them.  They had been through several hard freezes, which may account for the change in texture.

The last two bulbs were harvested just before New Years & they were the final harvest of the 2015 gardening season.

Overall Impressions & Plans for Next Year

More kohlrabi – that’s it.  Early White Vienna is OUT.  Together with the Kohlibi, I also want to try a variety that was grown on the farm and was equally tasty – Kossak.

This was the year when I figured out how to grow radishes…the quintessential “easy” vegetable.  In the past, I had interplanted them amongst other brassicas as they are quick to grow and I don’t consider them a major crop.  And therein lay my problem.

In the shade of other brassicas such as kale and collards (which also grow rather quickly in the spring), the radishes barely had a chance.  Many would simply bolt before forming a bulb while others produced undersized bulbs.  It took a post written by Mark to open my eyes – and now that I see what was happening, I’m of course scratching my head as to why I hadn’t realized it before.

So this year I gave the radishes their own spot in the bed and voila – nice, big, juicy bulbs:

Unfortunately, the white icicle radishes still didn't perform well.  Only 2 seedlings bulbed up.  Don't know what the problem is with that variety, but I've pretty much given up on them.

Even though I knew that radishes are best grown in cooler temperatures, I did attempt to get a succession of radishes happening during the summer, but that didn’t pan out.   The fall radishes were not as good as the spring ones, but decent enough to repeat in the future. 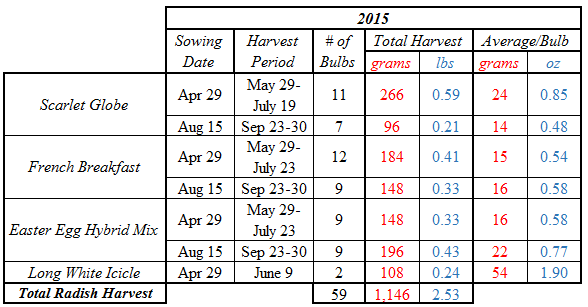 For comparison, last year I also grew Scarlet Globe in the spring and those that actually ended up forming a bulb averaged a measly 7 grams (not even a ¼ ounce!)…quite the improvement.

Now that I’ve had my radish breakthrough, I’ll be applying what I learned to next year’s crop.  I’ll only be growing radishes in the spring and fall and they will have their own, sunny spot in the bed.  Radishes keep forever in the fridge, so I won’t bother with succession planting.

As for varieties, I’ll be dropping the White Icicle and keeping the rest.  I’m quite happy with the variety that they provide, so I’ll not be trying out any new ones next year.